Skip to content
Home » Students consider the techniques of two inspirational artists for their own designs. 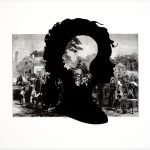 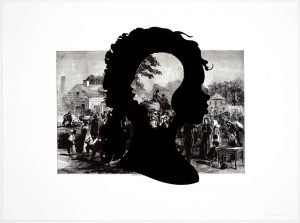 Kara Walker, Exxodus of Confederates from Atlanta from Harper’s Pictorial History of the Civil War (Annotated) [set of 15 prints], 2005. Offset lithography and silkscreen. 39” x 53’. Edition of 35 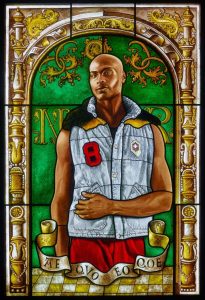 Two inspiration artists that have been part of our discussions in class are Kehinde Wiley and Kara Walker. These contemporary, internationally acclaimed African American artists use shape and pattern symbolically to address the history of racial injustice and representation in their work. In Walker’s work, silhouettes of black figures create narratives that tell the story of slavery and racial violence in the United States prior to the Civil War. While the details in the dress and hair of Walker’s figures reflect a past point in time, the emotional and conceptual weight of her work is magnified under the lens of today’s headlines.

Kehinde Wiley’s work focuses on the image of African Americans in the present day and often on specific individuals in lush, patterned backgrounds. His hyperrealist paintings make the subjects seem larger than life either figuratively or literally. Wiley also references history by taking inspiration from the titles and poses of works by classical masters. Wiley’s figures

exude the same power, grace and poise that was the hallmark of many Renaissance era works but, unlike those past paintings, his figures and faces are those of living black people in clothing that is evocative of their culture and the present moment.  Through his artwork Wiley documents a new history that includes black faces and brings attention to their absence in the canon of classical art.

In our first set of projects students are considering the techniques of Walker and Wiley for their own designs addressing shape and pattern. In art class we have been studying the way shape can be used to define our world by showing the boundaries between different spaces. This could be the organic shape of a leaf on grass or the geometric parts that we can identify in the structure of a building.

Walker is particularly skilled in using the detailed edges of shapes to give us instant recognition of a shape’s identity. Individually shapes can separate parts in an image, but when combined they can also give a sense of unity by forming patterns.

Wiley does this at the highest level in his intricate paintings, but he has also produced works in stained glass that capitalize on his dynamic use of shape.

Although we may not think of it immediately, stained glass is a study of shape because the image or design being formed is completely dependent on how pieces are strategically joined to form a larger whole. As students in art club draft stained glass designs they are considering how shape and pattern will influence their images as well.