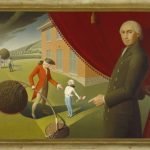 As the 4th of July approaches and we prepare to celebrate Independence Day I was reminded of the painting Parson Weems’ Fable by the artist Grant Wood. I first saw the painting while living in Texas at the Amon Carter Museum of American Art (https://www.cartermuseum.org/collection/parson-weems-fable) and it stuck in my memory because of its unusual qualities, but it wasn’t until recently that I dug deeper to understand the meaning behind the work.

It was painted at the end of the Great Depression, a time of intense challenges in the United States but also a time of hope. Regional Artists such as Wood were known for painting images that focused on distinctly American landscapes and a return to storytelling in art. Even if you don’t know much about art you may be familiar with another painting by Wood that has been reinvented and parodied many times in the modern era, called American Gothic: https://www.widewalls.ch/magazine/grant-wood-american-gothic-whitney

Wood became famous for his iconic images but the meaning behind his paintings is more complex than they may at first appear. While Wood lived and worked in Iowa and had a sincere reverence for the people and places he depicted, there are elements of satire that critique the mythology of America’s origin story and identity. His painting, Parson Weems’ Fable depicts the fable of how George Washington, as a boy, chopped down his father’s favorite cherry tree. When confronted, he stated “I cannot tell a lie.” and confessed to his actions. The figure in the foreground is Parson Weems drawing back the curtain on his own story and George Washington is shown with a boy’s body but his instantly recognizable face from the one-dollar bill.

The slaves of the Washington family are also depicted in the background picking cherries, which is a reality that exists alongside the idealized facts that we are often taught about our founding fathers. So, while this painting re-creates a popular fable of the time that celebrates George Washington’s strength of character it also signals in subtle ways to the viewer that there is more to the story. The inclusion of the curtain indicates that we are not looking at reality, but a recreation. The face of a much older Washington signals the fantasy of the story again in a slightly humorous way. For an excellent short explanation of all the other symbolism in the painting I recommend this short 6 minute video: https://www.khanacademy.org/humanities/art-1010/american-art-to-wwii/social-realism/v/grant-wood-george-washington-and-an-enduring-american-myth

For information on American Regionalism in art: https://www.theartstory.org/movement/american-regionalism/

For information on Washington and his stance on slavery: https://www.mountvernon.org/george-washington/slavery/ten-facts-about-washington-slavery/