Skip to content
Home » Taco Tuesday & Other Anomalies: Creating Community and Culture in a New School 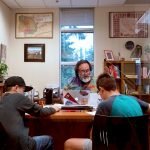 In the summer of 2019, I began making tacos on Tuesdays, not because I am the Spanish teacher with Mexican background but because the availability of a decent taco in the Pacific Northwest is rather low. There are good tacos out there, I know that there are, but driving around and testing one place after another can be frustrating (on account of the poorly made tacos) and because tacos in the Seattle greater area are not economical. In my childhood experience tacos were a very economical street food. I am also the child of a restauranteur and he (my Father) is the child of yet another restauranteur. You wouldn’t find tacos in the menus of their restaurants but that’s because at the time, they were, as I mentioned, street food. There’s also the economical aspect of the taco and my Father and Grandfather were most definitely not interested in providing economical food. So, what am I doing in the teaching profession instead of running restaurants? Well, that’s an anecdote for a different blog. I mean to write about community building and about creating traditions at a new school.

“Give someone a hand and they’ll expect a leg.” This quote tells me that once a person receives something, they begin to expect it and if you provide them with this consistently, they’ll even demand it. The students do say, “Thank you,” but skip one Tuesday and you start getting the complaints. I suppose this shows that they really enjoy what you are doing for them. Once I started this, I knew that it needed to continue. Luckily, my colleague Paul Converse, WaPrep science teacher, began helping me. He has become quite a connoisseur of tacos, of good Mexican food and of international cuisine in general. Without his help on Tuesdays, I would have given up, or at least I would have considered giving up because cooking and managing food is definitely a difficult task.

As this occurrence began to take a life of its own, it became quite apparent that it was now a tradition. Yes, a WaPrep tradition that is both internationally aware and quite delicious as an afternoon snack. My teaching schedule does limit time for food preparation and clean up and I hope to engage students and other faculty in this tradition moving forward.

At the end of winter, I enjoyed my annual looking out for the bulbs: first the crocuses, then the daffodils and finally the tulips. It occurred to me that we should have a section in the new campus for bulbs. More importantly, it occurred to me that we could build it into a sort of tradition for the school, the annual planting and the looking out for the bulbs to come out of the ground. I spoke with another colleague Eunice Bonaparte, who teaches History and Civics among other subjects at WaPrep. She and I began a think tank on how to have incoming families plant bulbs in the Autumn Equinox, right around the start of the academic year and then have some kind of celebration during the Spring Equinox when the bulbs would be in full bloom. COVID-19 has caused some things to be placed on hold, but I do think that this program will also be institutionalized as a tradition. Wouldn’t it be wonderful, if years down the line alumni would come to show the bulb garden to their families, or that WaPrep would be known as a school that brings beauty and awareness to the seasons and the cycles of the year? Or simply that our school community would enjoy planting and beholding the natural beauty of the campus?

I believe that creating rituals, ceremonies, occasion markers or whatever other name one chooses to call these, will strengthen the bonds of the community both within itself and within the larger community. These traditions would give us a sense of the passage of time and a chance to feel our own ownership in the natural beauty. And, YES! It would also give us yummy tacos to compare with states like California, Texas, Arizona and New Mexico.