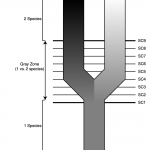 One of the most obvious and frustrating observations in biology is the existence of species. Obvious in the sense that there are immediate and large differences between yourself and say, a cat. But frustrating in the sense that finding a definition that holds true across the entire tree of life has been elusive.

Humans have noted the diversity of organisms since antiquity. Without knowledge of genetics, ecology, etc. our languages fell short to describe this diversity. Delineating an animal from a plant is easy, but differentiating between closely related beetles is a harder task. Different “kinds” of animals were noted and recorded, but left us with more questions: how does one tell one “kind” of an animal from another?

The description and differentiating between obviously different species began before biology (specifically evolutionary biology) was a formal science. Charles Darwin himself struggled with the “species problem,” as he cemented his ideas on common ancestry and natural selection (“decent with modification”). As various branches of biology matured and refined their predictions, attempts to tackle the “species problem” became more diverse (species concepts, SC).

The ‘bread and butter’ definition most of us learn in school is that a species is constituted of individuals that can interbreed and produce viable offspring, known as the biological species concept (BSC). This definition, however, is flawed due to the underlying assumptions it makes. In animal systems this definition seems bullet-proof: a cat cannot produce viable offspring with a duck, for instance. Outside of the animal clade, this definition performs quite poorly. An example are bacteria. Food poisoning is caused certain strains of Escherichia coli while tuberculous is caused by the bacterium Mycobacterium tuberculosis. Are these different species? Under what criteria? They cannot produce offspring or interbreed as they are asexual and reproduce via binary fission. In a nutshell, the BSC is biased towards organisms that have two sexes and utilize sexual reproduction. It cannot help us quantify diversity in bacteria or other organisms with asexual reproduction.

The above are a mere sample of species concepts. Students in IB Biology are required to know the definitions, advantages and pitfalls of varying species concepts. They will also debate them in class, as science is moved forward by debate and evidence. Successful students in science think, ponder evidence, and debate, the lifeblood of science. Rote memorization is an excellent way to kill someone’s interest in a subject.

The species problem is fascinating, disconcerting, and challenging at the same time. Fascinating as it shows the panoply of diversity that life harbors; disconcerting because it is difficult to preserve species if one cannot define them; challenging as it makes us rethink our language, philosophies, and science. What is often taught in schools is taught as “settled science,” but this is a misaligned approach. Science is lively and messy; it requires deep thought and willingness to fail. I hope to share this lively mess with my IB Biology students this autumn.