The final assignment in 2020 for my Pre-Calculus students was to research and present an introduction to conic sections. Students learned that slicing a right cone at varying angles will produce a circle, ellipse, or hyperbola (or of course a point or line if it’s a special case). Click here, if you would also like to learn a bit about the fascinating world of conics. 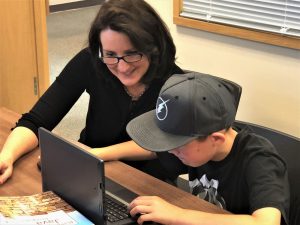 The purpose of this assignment was to gain an overall understanding of conics, its history, and applications, but also for the class to talk to each other, get away from the thumbnail version of me, and to practice their online presentation skills. It is not just Covid-19 that is making this a necessary skill, but our global world in general and these students are stepping up to the plate with enthusiasm and presentation skills that rival some adults. In our two days of presentations, we watched students share information, speak English more fluently than they had all school year, and make us laugh with comical drama scenes. I applaud them all!

The next steps for my Pre-Calculus students who created the conics presentation will be along different paths. As a rising ninth-grader, one will jump into AP Calculus BC for the next two years taking IB Maths Applications and Interpretations High Level as a junior, while the other student will start Applications and Interpretations next year. Both have impressed me with their work ethic, level of commitment, and quality of work that has continued even during this interesting time of online teaching and learning. They are our future leaders, our vaccine developers, architects, city planners, or anything they choose to be. With their commitment, hard work, and invaluable education they receive at Washington Preparatory School, all doors are open to them. I am excited to see where they go and the problems they solve!

As the 4th of July approaches and we prepare to celebrate Independence Day I was reminded of the painting Parson Weems’ Fable by the artist Grant Wood. I first saw the painting while living in Texas at the Amon Carter Museum of American Art (https://www.cartermuseum.org/collection/parson-weems-fable) and it stuck in my memory because of its unusual qualities, but it wasn’t until recently that I dug deeper to understand the meaning behind the work.

It was painted at the end of the Great Depression, a time of intense challenges in the United States but also a time of hope. Regional Artists such as Wood were known for painting images that focused on distinctly American landscapes and a return to storytelling in art. 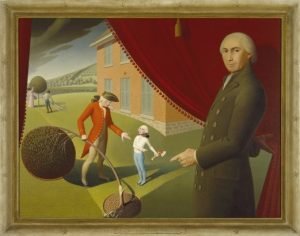 Even if you don’t know much about art you may be familiar with another painting by Wood that has been reinvented and parodied many times in the modern era, called American Gothic: https://www.widewalls.ch/magazine/grant-wood-american-gothic-whitney

Wood became famous for his iconic images but the meaning behind his paintings is more complex than they may at first appear. While Wood lived and worked in Iowa and had a sincere reverence for the people and places he depicted, there are elements of satire that critique the mythology of America’s origin story and identity. His painting, Parson Weems’ Fable depicts the fable of how George Washington, as a boy, chopped down his father’s favorite cherry tree. When confronted, he stated “I cannot tell a lie.” and confessed to his actions. The figure in the foreground is Parson Weems drawing back the curtain on his own story and George Washington is shown with a boy’s body but his instantly recognizable face from the one-dollar bill.

The slaves of the Washington family are also depicted in the background picking cherries, which is a reality that exists alongside the idealized facts that we are often taught about our founding fathers. So, while this painting re-creates a popular fable of the time that celebrates George Washington’s strength of character it also signals in subtle ways to the viewer that there is more to the story. The inclusion of the curtain indicates that we are not looking at reality, but a recreation. The face of a much older Washington signals the fantasy of the story again in a slightly humorous way. For an excellent short explanation of all the other symbolism in the painting I recommend this short 6 minute video: https://www.khanacademy.org/humanities/art-1010/american-art-to-wwii/social-realism/v/grant-wood-george-washington-and-an-enduring-american-myth

For information on American Regionalism in art: https://www.theartstory.org/movement/american-regionalism/

For information on Washington and his stance on slavery: https://www.mountvernon.org/george-washington/slavery/ten-facts-about-washington-slavery/

Taco Tuesday & Other Anomalies: Creating Community and Culture in a New School by Sephy Elizai

In the summer of 2019, I began making tacos on Tuesdays, not because I am the Spanish teacher with Mexican background but because the availability of a decent taco in the Pacific Northwest is rather low. There are good tacos out there, I know that there are, but driving around and testing one place after another can be frustrating (on account of the poorly made tacos) and because tacos in the Seattle greater area are not economical. In my childhood experience tacos were a very economical street food. I am also the child of a restauranteur and he (my Father) is the child of yet another restauranteur. You wouldn’t find tacos in the menus of their restaurants but that’s because at the time, they were, as I mentioned, street food. There’s also the economical aspect of the taco and my Father and Grandfather were most definitely not interested in providing economical food. So, what am I doing in the teaching profession instead of running restaurants? Well, that’s an anecdote for a different blog. I mean to write about community building and about creating traditions at a new school.

“Give someone a hand and they’ll expect a leg.” This quote tells me that once a person receives something, they begin to expect it and if you provide them with this consistently, they’ll even demand it. The students do say, “Thank you,” but skip one Tuesday and you start getting the complaints. I suppose this shows that they really enjoy what you are doing for them. Once I started this, I knew that it needed to continue. Luckily, my colleague Paul Converse, WaPrep science teacher, began helping me. He has become quite a connoisseur of tacos, of good Mexican food and of international cuisine in general. Without his help on Tuesdays, I would have given up, or at least I would have considered giving up because cooking and managing food is definitely a difficult task. 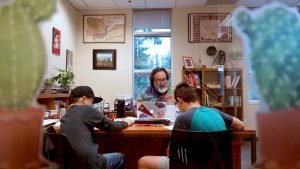 As this occurrence began to take a life of its own, it became quite apparent that it was now a tradition. Yes, a WaPrep tradition that is both internationally aware and quite delicious as an afternoon snack. My teaching schedule does limit time for food preparation and clean up and I hope to engage students and other faculty in this tradition moving forward.

At the end of winter, I enjoyed my annual looking out for the bulbs: first the crocuses, then the daffodils and finally the tulips. It occurred to me that we should have a section in the new campus for bulbs. More importantly, it occurred to me that we could build it into a sort of tradition for the school, the annual planting and the looking out for the bulbs to come out of the ground. I spoke with another colleague Eunice Bonaparte, who teaches History and Civics among other subjects at WaPrep. She and I began a think tank on how to have incoming families plant bulbs in the Autumn Equinox, right around the start of the academic year and then have some kind of celebration during the Spring Equinox when the bulbs would be in full bloom. COVID-19 has caused some things to be placed on hold, but I do think that this program will also be institutionalized as a tradition. Wouldn’t it be wonderful, if years down the line alumni would come to show the bulb garden to their families, or that WaPrep would be known as a school that brings beauty and awareness to the seasons and the cycles of the year? Or simply that our school community would enjoy planting and beholding the natural beauty of the campus?

I believe that creating rituals, ceremonies, occasion markers or whatever other name one chooses to call these, will strengthen the bonds of the community both within itself and within the larger community. These traditions would give us a sense of the passage of time and a chance to feel our own ownership in the natural beauty. And, YES! It would also give us yummy tacos to compare with states like California, Texas, Arizona and New Mexico.

What is a species?
By Paul Converse

One of the most obvious and frustrating observations in biology is the existence of species. Obvious in the sense that there are immediate and large differences between yourself and say, a cat. But frustrating in the sense that finding a definition that holds true across the entire tree of life has been elusive.

Humans have noted the diversity of organisms since antiquity. Without knowledge of genetics, ecology, etc. our languages fell short to describe this diversity. Delineating an animal from a plant is easy, but differentiating between closely related beetles is a harder task. Different “kinds” of animals were noted and recorded, but left us with more questions: how does one tell one “kind” of an animal from another?

The description and differentiating between obviously different species began before biology (specifically evolutionary biology) was a formal science. Charles Darwin himself struggled with the “species problem,” as he cemented his ideas on common ancestry and natural selection (“decent with modification”). As various branches of biology matured and refined their predictions, attempts to tackle the “species problem” became more diverse (species concepts, SC).

The ‘bread and butter’ definition most of us learn in school is that a species is constituted of individuals that can interbreed and produce viable offspring, known as the biological species concept (BSC). This definition, however, is flawed due to the underlying assumptions it makes. In animal systems this definition seems bullet-proof: a cat cannot produce viable offspring with a duck, for instance. Outside of the animal clade, this definition performs quite poorly. An example are bacteria. Food poisoning is caused certain strains of Escherichia coli while tuberculous is caused by the bacterium Mycobacterium tuberculosis. Are these different species? Under what criteria? They cannot produce offspring or interbreed as they are asexual and reproduce via binary fission. In a nutshell, the BSC is biased towards organisms that have two sexes and utilise sexual reproduction. It cannot help us quantify diversity in bacteria or other organisms with asexual reproduction.

The above are a mere sample of species concepts. Students in IB Biology are required to know the definitions, advantages and pitfalls of varying species concepts. They will also debate them in class, as science is moved forward by debate and evidence. Successful students in science think, ponder evidence, and debate, the lifeblood of science. Rote memorisation is an excellent way to kill someone’s interest in a subject.

The species problem is fascinating, disconcerting, and challenging at the same time. Fascinating as it shows the panoply of diversity that life harbours; disconcerting because it is difficult to preserve species if one cannot define them; challenging as it makes us rethink our language, philosophies, and science. What is often taught in schools is taught as “settled science,” but this is a misaligned approach. Science is lively and messy; it requires deep thought and willingness to fail. I hope to share this lively mess with my IB Biology students this autumn. 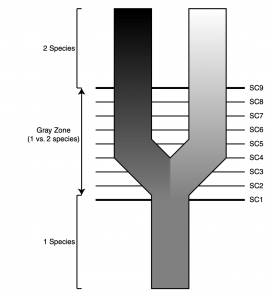 All events, camps, and courses